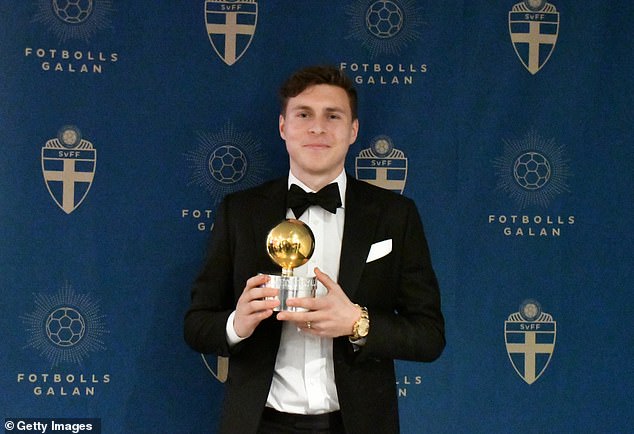 Manchester United defender Victor Lindelof has been named Sweden’s player of the year.

The 24-year-old was given the honour on Monday night, and became just the second player to win it after a decade of dominance by his former club team-mate Zlatan Ibrahimovic.

LA Galaxy striker Ibrahimovic won it in every year between 2007 and 2016.

‘Thank you very much. It means very much for me to stand here today and receive this prize,’ he said.

‘I am very proud and extremely grateful. I want to thank all my team-mates, in the club team and national team.

‘Then I would like to thank my family as they always been there for me in good and bad.

‘You really mean everything to me.’

He also thanked his wife, Maja: ‘To my beautiful wife: thank you very much for being there and taking care of me and helping me and always supporting me.

‘You… you are… you mean everything to me.’

Lindelof was one of the stars of Sweden’s World Cup campaign as they reached the quarter-final stages, only to be knocked out by England.

He has also impressed for Manchester United in recent weeks, although he was on the losing side in this weekend’s derby against Manchester City. United lost that game 3-1.

Lindelof follows Andreas Granqvist in picking up the honour. His fellow central defender ended Ibrahimovic’s dominance over the award last season when the striker did not win it for the first time since 2006.

Sweden take on Turkey and Russia during the international break.