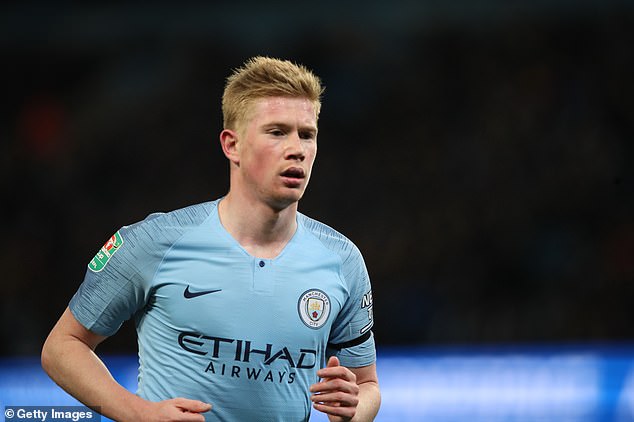 Manchester City midfielder Kevin De Bruyne is targeting a return from his knee injury at the beginning of next month.

De Bruyne had feared he would miss six weeks after damaging ligaments towards the end of victory over Fulham on November 1.

But the Belgian is responding well to treatment and already has eyes on two fixtures – Bournemouth at home on December 1 or Watford away three days later – as potential return dates.

De Bruyne is desperate to make himself fully available for the title clash against Chelsea at Stamford Bridge on December 8.

Featuring in any of those games would act as a significant boost for Pep Guardiola, who was without De Bruyne for much of the opening two months of the season with a similar problem.

Guardiola also hopes the issue Sergio Aguero picked up during Sunday’s win over Manchester United can be rectified over the international break.

Aguero was seen with strapping on his hamstring as he left the Etihad Stadium. The striker was not called up by Argentina and will be monitored by City’s medical department.

One of them, head physio Lee Nobes, is leaving to join Liverpool and starts at Melwood in a fortnight. Nobes has been at City for 11 years.