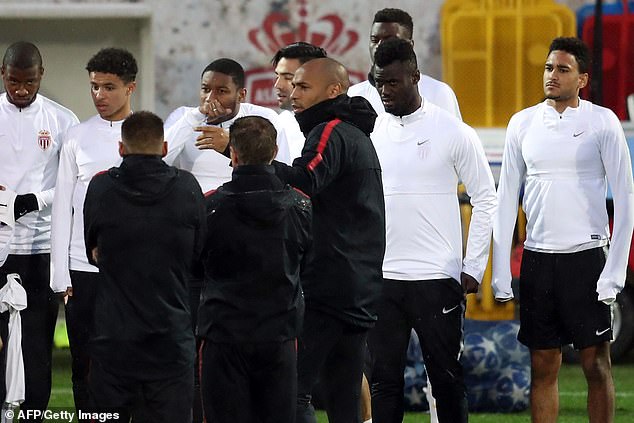 Monaco undertook their final training session on Monday ahead of their Champions League clash at home to Club Brugge on Tuesday night.

Thierry Henry, who is still waiting for the first win of his managerial career and will be looking to secure it in the Champions League clash, led the session after claiming his players refused to play following their shock loss to Reims.

After the narrow 1-0 defeat by Reims, Henry said: ‘This was more worrying than on previous occasions because we do not produce any football.

‘This evening was not about tactics, it was about a lack of desire. If you don’t win any duels, then its difficult to win a football match. I understand our fans’ frustration.

‘This is a delicate situation. When you enter the pitch and your players involuntarily refuse to play, it is difficult.

‘We have to find our confidence again. I would not have come to Monaco if I did not think that there was quality in this team.’

Monaco are currently languishing in 19th place in the Ligue 1 table, and the situation isn’t much better for them in the Champions League as they are in third place in Group A having taken just one point from their three games so far.

Henry is able to call upon striker Radamel Falcao, but Monaco are sorely in need of a morale-boosting victory.

Ex-France international Henry looked focused during the training session as he issued instructions to his squad.

Henry is on the cover of the new issue of France Football magazine, which is accompanied by the caption ‘hidden sides’.

Monaco and Brugge drew 1-1 in Belgium last month and Henry’s team will be eager to make home advantage count.

They will also be eager to get the fans back on their side, with some supporters having expressed their frustration with the team following the 1-0 league defeat to Reims at the weekend.