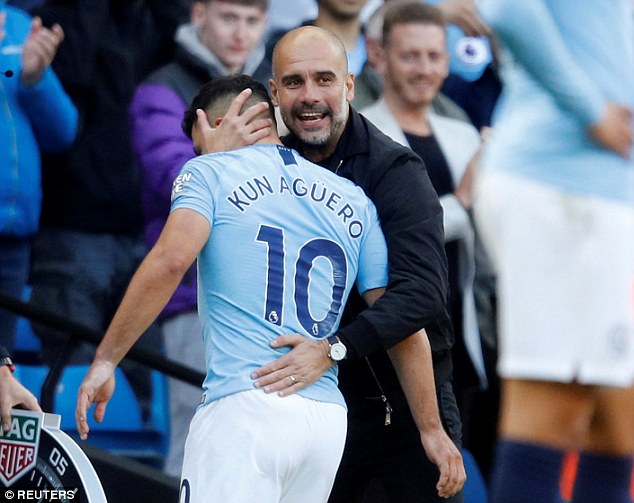 Pep Guardiola insists next weekend’s highly-anticipated clash with Liverpool will not affect the way he sees his Manchester City team.

The pair sit together at the top of the Premier League table on 19 points after City defeated Brighton 2-0 before Liverpool secured a late equaliser to draw with Chelsea and preserve their unbeaten record.

City strolled to the title last season, playing only for records over the final weeks of the season, but this campaign is shaping up differently, with Chelsea and especially Liverpool looking capable of providing a serious challenge.

Jurgen Klopp’s side were Guardiola’s nemesis last season, winning three of the four meetings, including both legs in the Champions League quarter-finals.

City have not beaten the Reds at Anfield in any competition since May 2003 and have lost on their last six league visits.

Guardiola said: ‘I believe too much in that team, in those guys. I know how they fight. Go to Anfield, win, lose, whatever. It’s a long time ago Man City was able to win at Anfield. What I want to see is the team alive, and we are alive.

‘If they beat us three times, they are a good side. They lost the first game in the Carabao Cup (against Chelsea last week) but at Anfield they score a lot of goals, they don’t concede.

Tuesday’s Champions League clash in Germany has been given added weight by City’s opening loss to Lyon, but their week began positively with a routine victory over Brighton.

City enjoyed 80 per cent of possession and had seven times as many shots as the Seagulls, who only have five points to show from their first seven games but have impressed in a tricky early run of fixtures.

Their only victory so far came against Manchester United, and boss Chris Hughton told Sky Sports: ‘What we have to be is realistic, and certainly our supporters are.

‘We’ve played seven games, four against the top six, two other games away from home, with one at Watford, who have started so well. When we are evaluating where we are at the moment, we have to take that into context.

‘Having said that, we have the best chance of picking up the majority of our points outside the top six, and we have to do that.’