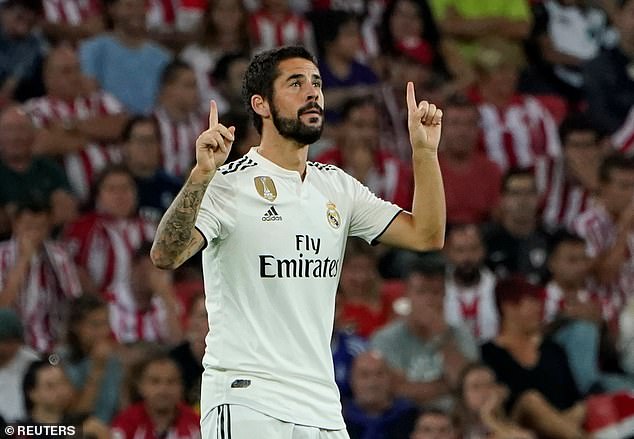 Isco admits he has plenty of work to do to impress Julen Lopetegui and make his way back into Real Madrid’s starting XI.

The midfielder, who was also managed by Lopetegui while he was Spain boss, had to come off the bench to rescue a point for Madrid as they drew 1-1 with Athletic Bilbao in La Liga on Saturday night.

It was the second consecutive La Liga match that Isco failed to make the starting line-up, after also coming on as a substitute during their 4-1 thrashing of Leganes before the international break.

Isco’s limited game time has surprised many in Spain, with plenty expecting the playmaker to be an integral part of Lopetegui’s side this season.

But speaking following Madrid dropping their first points of the season, Isco claimed there may be players performing stronger than him and that he has to earn his place.

‘It’s not just me in the team,’ said the 26-year-old. ‘There are other team-mates who may be better than me and that’s why the coach chooses his starting line-up.

‘All that stuff about how it was going to be Isco and 10 more under Lopetegui, that’s what you [reporters] were saying.

‘It’s a long season and we’ll need to be prepared. As the coach says, the important thing is that everyone is ready and ready to meet the objectives.’

Following the European clash, Madrid take on Espanyol at home as they look to return to winning ways in La Liga.