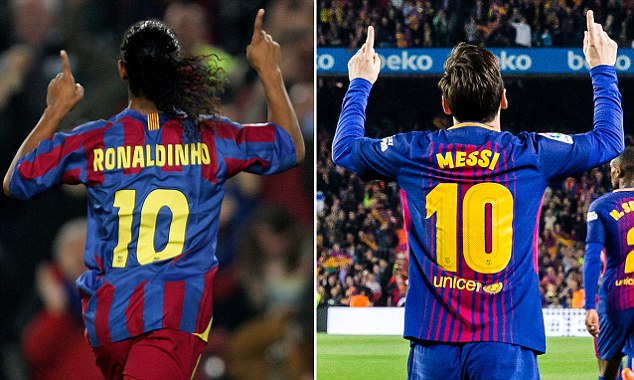 Ronaldinho has claimed that Barcelona should retire the No 10 shirt once Lionel Messi leaves the club.

Messi took the famed ’10’ when Ronaldinho left the club to join AC Milan in 2008 and has continued to hit new heights ever since, with the Argentina international undoubtedly one of the greatest players of all time.

The 31-year-old’s current deal at the Nou Camp runs until the summer of 2021, and Ronaldinho believes that the ultimate mark of respect should be paid to the forward, whenever he so chooses to vacate the jersey.

As reported by The Sun, Ronaldinho said: ‘When Messi retires, which I hope will be a long time from now, they should leave the No 10 there so that nobody can touch it again.’

Other notable names to wear the No 10 shirt for Barcelona include Rivaldo, Romario and Pep Guardiola.

Ronaldinho believes that Messi is Barcelona’s best ever player and expressed hope that the attacker will continue playing for many years to come.

Ronaldinho said: ‘He is the best in the club’s history and has done what no one else could.

‘I hope it stays that way for another 20 years at least.

‘For anyone who loves football, we would like keep him at this level for many more years.’

While Ronaldinho was full of praise for Messi, he admitted that there are many contenders when it comes to naming the greatest player of all time.

Ronaldinho said: ‘It is hard because there have been so many at different times. There was Pele in his time, Maradona in his.

‘Zidane had his moment while Ronaldo Nazario enjoyed his. What is clear, is that Messi is undoubtedly among the greatest in history.’