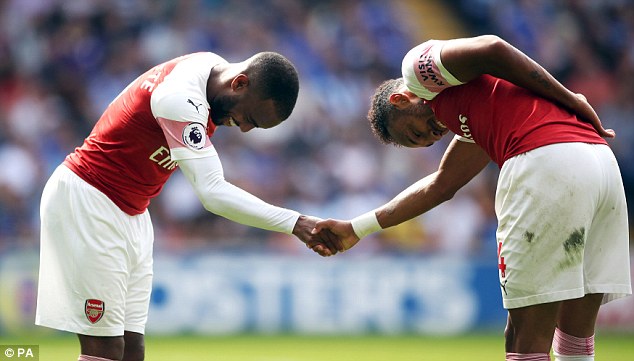 As Pierre-Emerick Aubameyang’s delicious curling strike planted into the corner of the Cardiff goal, Alexandre Lacazette led the fist-pumping celebration as the Arsenal players cavorted towards their supporters.

This was a spell-binding moment, a goal of exquisite quality that briefly deflated a vibrant Cardiff team but more significantly, it felt like a unifying moment for Arsenal. Unai Emery’s front three on the day, with Lacazette flanked by Mesut Ozil and Aubameyang, finally harmonised and the result was devastating.

The trio did not always work in perfect tandem during this game. Aubameyang, much like Ozil, will feel he was too often on the periphery of the game until the second Arsenal goal.

Ozil, for his part, still has much to do to convince he is a suitable fit on the right of the three and Cardiff worked hard to close the space and particularly to fill pockets of space when both players drifted inside from their wide position.

Yet the Aubameyang goal showcased the trio at their most effective. Ozil began the move, drifting in from the right, probing gently and measuring a pinpoint pass between the lines to Lacazette, who joined up the play with a sumptuous backheel.

From there, Aubameyang’s talent took centre stage as he placed a wonderful effort from 25 yards dipping beyond Neil Etheridge in the Cardiff goal. It was the forward’s first goal of the scene and after guilt-edged misses in the defeat at Chelsea, the swagger should not return to Aubameyang’s play.

Running over to the corner of the stadium, Ozil and Aubameyang high-fived and then the striker sought out Lacazette for a quick jig. Aubameyang’s goal restored Arsenal’s lead after Shkodran Mustafi’s opening goal was cancelled out by Victor Camarasa on the brink of half-time. 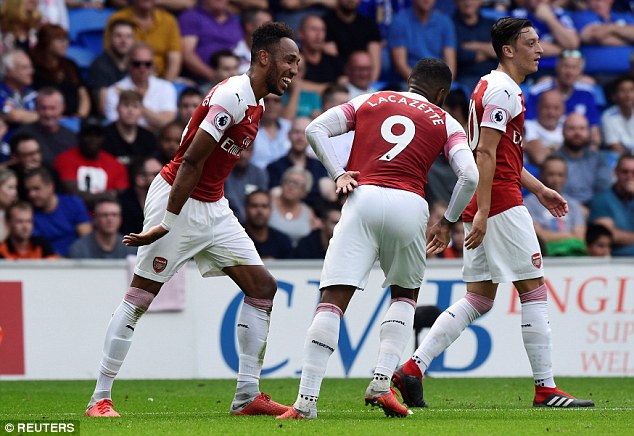 For Arsenal, this goal should have been the moment they took the game away from Cardiff. Instead, their exasperating defence intervened, sloppily conceding from a set-piece as Danny Ward was left unmarked to glance a second equaliser.

So it fell on Lacazette to step up once more, as he unleashed a powderkeg strike that startled Etheridge and flew into the roof of the goal.

For Arsenal supporters, this was a long overdue glimpse of the potential of the Aubameyang and Lacazette partnership. Under Arsene Wenger, the pair started only three matches together but Unai Emery has been attempting to work out a way to combine the pair since the club’s pre-season in Singapore.

Here in Cardiff, Emery employed a system whereby Lacazette played as the main striker while Aubameyang cut in from the left-wing in a 4-3-3 formation.

Off the field, the pair have developed a close bond, as evidenced back in April when Aubameyang relinquished the chance of a hat-trick against Stoke so Lacazette could score a goal and end a goal drought that saw him score just once between December 2 and April 1.

Lacazette, we should remember, joined Arsenal in a club-record £52million transfer last summer but after scoring four goals in his first six Premier League appearances, he gradually lost his way in the depths of winter.