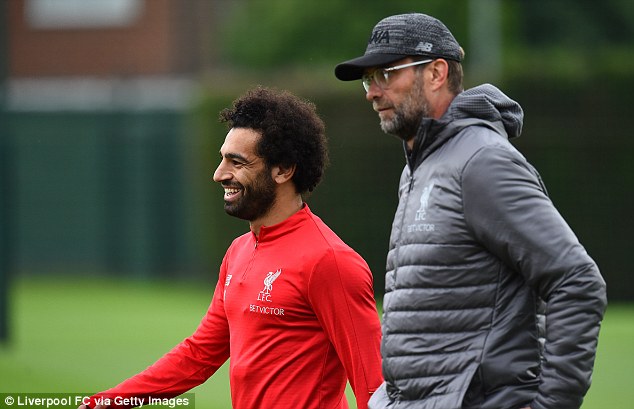 Jurgen Klopp is adamant Mohamed Salah still wants to play for his country and hopes a swift resolution will be found to his row with Egypt’s FA.

Salah and his agent, Ramy Abbas Issa, took to social media to voice grievances that include a conflict over his image rights and concerns about his personal security at the Egypt hotel after, the Liverpool forward claimed, a fan knocked his door in the early hours of the morning.

Egypt face Niger next Saturday but Klopp believes Salah will be involved in the fixture as ‘in his heart’ he wants to represent his country. It has become a huge issue in Egypt but Klopp insists there will not be implications on his club form.

‘When was the last time Egypt had a player like him? That’s how it is. They need to get used to it. So far, maybe it was not perfect. Make it perfect, and everything is fine at the end. He’s a very smart person. They will solve it, I am sure.’

Though he has scored two goals in three games, Salah’s performances in the opening three games have not been blistering. It has led to questions whether he is suffering from a World Cup hangover or the expectation of reproducing last season’s remarkable form is hanging over him.

Klopp, though, does not believe the increased demands are taking a toll. He has spoken frequently with Salah, who signed a bumper five-year contract in the summer to make him Liverpool’s highest earner, and made it clear the pressure will not come from the dugout.

‘He’s not thinking about the end of the season,’ said Klopp, whose side are looking to register a fourth win before the international break. ‘He knows our game here and that he had no number in his mind or thought ‘OK let me score a new record’.

‘He’s a very smart person, very smart – he’s not a kid any more and he doesn’t expect that everything will be like this all the time (raises hand high). If it is not like that any more, then he will dig deep, he is completely settled.’

There is also no lingering effects from the Champions League final, where he was substituted after a well-documented collision with Sergio Ramos. It did not go unnoticed at Anfield how the seating plan at Thursday’s Champions League draw saw Ramos given a seat directly behind Salah.

‘Of course nobody wanted to have the situation in the final – nobody,’ said Klopp. ‘Maybe they see it differently but it was not a big surprise Egypt didn’t go to the World Cup semi-final. That’s it, so he’s here and he is completely fine. We are in football and I know how it works.’