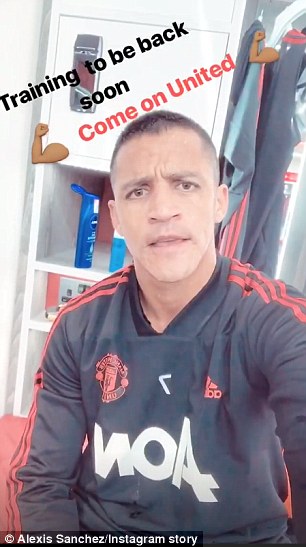 Alexis Sanchez has provided Manchester United fans with an update on his injury just 24 hours after receiving abuse online from his own fanbase.

The Chilean forward took to Instagram to tell supporters that he is back in training while he dripped in sweat on Tuesday afternoon.

His reassuring words came not long after he was hounded by United fans for promoting his new range of JJO clothes following the 3-2 defeat to Brighton on Sunday. 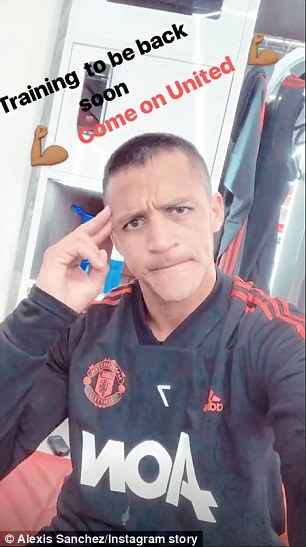 Sanchez uploaded a video advert and four photos of himself modelling for JJO, but took down both tweets after being accused of ‘terrible timing’.

The former Arsenal star is the highest paid player in the Premier League and a disgruntled fan scoffed: ‘We signed a model for 500k a week.’

Sanchez lauched his ‘Alexis’ range alongside a female model who was seen in the video peaking at the Chilean from behind a curtain as he got dressed, undressed and re-dressed into various outfits.

United manager Jose Mourinho refused to go into detail about the injury which prevented Sanchez facing Brighton at the weekend, describing it only as a ‘little problem’.

Speaking via United’s website after the game, Mourinho added that Sanchez should not be sidelined for more than a fortnight but could miss next Monday’s game against Tottenham.

He said: ‘I don’t know really. Let’s wait for the results of the studies, but I don’t think it’s a big thing. I think it will be one or two weeks maximum.’