France And Croatia Both Have Stars That Can Lead Them To Glory In Russia… But Who Has The Edge Heading Into The World Cup Final? Eagleseye Footy Rates The Two Teams Ahead Of Sunday’s Clash 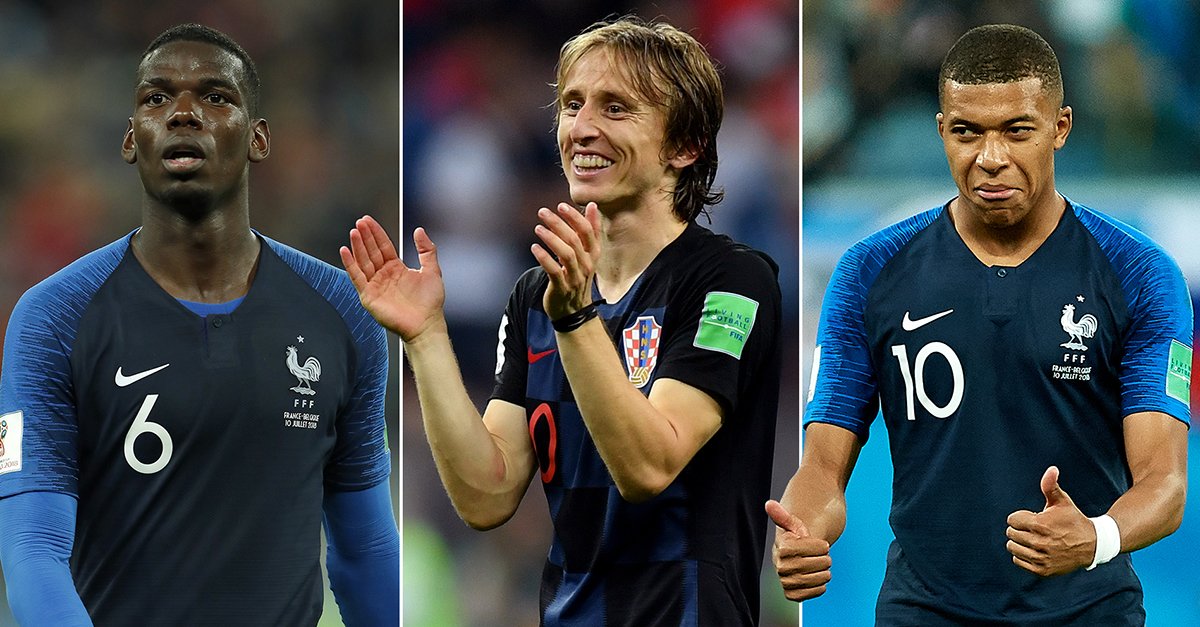 This Sunday’s World Cup final poses an interesting contest as France prepare to face Croatia at the Luzhniki Stadium.

All eyes across the planet will be glued to their respective television sets as they watch the final of the greatest competition in sport, with two nations seeking to write their names into the history books and become champions of the world.

It is set to be an intense and thrilling encounter, with both sides possessing some of European football’s biggest stars. With this in mind, Eagleseye Footy has pipped the two teams against each other and rated the individual stars ahead of their Moscow meeting.

Aside from a minor blip against Argentina in the last 16, Didier Deschamps’ men have been in relatively safe hands with captain Hugo Lloris manning their goal for all but one of their games in Russia. There is always a fear though that the Tottenham goalkeeper has an error in him, however, that is yet to happen in Russia and he has been crucial to his country’s success with lightning reflexes and quick acceleration off the line.

Danijel Subasic has conceded slightly more goals than his rival Lloris — five to the Frenchman’s four — but has lived up to his reputation as a specialist penalty saver throughout the tournament. He has faced two shootouts and became only the third goalkeeper in history to save four spot kicks during a shootout when he denied Russia’s Fedor Smolov in the quarter-final.

Stuttgart’s young full back, just 22, Benjamin Pavard has been one of France’s key suppliers from wide areas, and scored that wonder goal in the 4-3 win over Argentina. Deschamps has rewarded him for his performances too, missing only one game – a worthless goalless draw with Denmark.

Sime Vrsaljko has also missed only one game but has played slightly more football due to the two extra-time victories Croatia have achieved so far. His place in the Croatian line-up is unquestionable and will be key to keeping out the French attack.

Real Madrid’s star centre half Raphael Varane has been the ever-present rock in the heart of the French defence that has seen them concede only four goals – and he has even contributed one himself by getting his country off the mark against Uruguay two rounds ago.

Crucial to Croatia’s resilience at the back, Dejan Lovren has been a solid force when coming up against somewhat ‘superior’ opposition and will be key if they are to upset the French at the Luzhniki.

The man who headed his country into their third World Cup final, the towering presence of Samuel Umtiti will no doubt be a threat to his defensive opposition this weekend. Controlling this brute in the box will be a tall order for the Croatians.

Anyone that has followed this Croatian side throughout this tournament will have picked up on Domagoj Vida – a fiery no-nonsense centre half with the drive to go all the way. He has battered through his opposition with heroic resilience and scored a vital goal in extra-time against the hosts. Aerial duels will be key in this encounter, and he will no doubt have taken note of Umtiti’s header which sent Belgium packing in the semis.

When you think of Lucas Hernandez, you picture someone sprawled across the floor appealing for a foul. The Atletico Madrid full back has spent much of his time in Russia playing for minutes rather than playing the game – and has openly admitted to it as well. The Croatians will need to watch his games and avoid falling into the traps in place.

Likely to come in for Ivan Strinic, who limped off injured in the semi-final win over England, Josip Pivaric may struggle to sleep on Saturday night. He has only played one full game in Russia — against Iceland — but was brave when coming on against Gareth Southgate’s men during extra time on Wednesday night. Well, he stayed on his feet at least.

N’Golo Kante has a place in almost any team, he is that good and brings that much to the table. In terms of goals and assists, he isn’t the man you turn to — although he has shown he can find the net on occasion — but his energy in the middle of the park gives Paul Pogba the license to move forward and dictate the game.

The significance of Marcelo Brozovic to Croatia is identical to that of Kante in the France side. He is to be the man responsible for protecting the Croatian back-line from the French on Sunday and has done so well throughout in Russia, and was central to keeping England’s lead to just one before Croatia equalised on Wednesday night. He has a good engine and is always up for a battle.

Paul Pogba really has come into his own this summer. After a tough first two seasons in English football, Pogba has looked full of energy and vigour in Russia and should dominate the physical aspect of the midfield battle with his size advantage alongside Kante.

One half of Croatia’s frightening midfielder duo, Ivan Rakitic is no stranger to a big game and has plenty of experience to call upon from his experience so far with Barcelona. He concluded a memorable win of the Argentinians in the group stages and forms a strong pairing with Luka Modric. He has the tools to outwit Pogba but his creative side may take a back seat on Sunday slightly as he faces a battle with the Frenchman’s intimidating size advantage.

Antoine Griezmann has been all the talk this summer, but for his part in a transfer saga rather than his efforts for France. Heading into the tournament he was expected to be the main man, and it seems that way. Three goals to his name, the Golden Boot appears to be one step too far but he has come up with the goods when his side need it most.

At Real, Croatia’s skipper Luka Modric has won it all but this would be the cherry on an incredibly decorated cake. Modric’s eye for a pass, and also for goal, leaves defenders guessing his next move rather than anticipating. Give him a second on the ball and he could tear France apart. There is no doubt that Croatia would not be where they are without him, leaving Kante will have his work cut out for him with this one.

Already the first teenager to score at least two goals in a World Cup game since Pele in 1958, the fearlessness of this teenager terrifies all that face him. Kylian Mbappe has set this tournament alight. The 19-year-old has glided past some of the world’s best defenders consistently this summer and scored crucial goals too. He will make for a terribly uncomfortable afternoon for Croatia’s Strinic.

Ante Rebic offers a quick outlet for Croatia which will be utilised throughout to relieve some pressure. He has been trusted throughout and has been reliable to Croatia for the most part – he’s started each knock-out game. But while he will fancy his chances against Hernandez going forward, his impact for his country is dwarfed by that of Mbappe, who has broken record after record in Russia.

Blaise Matuidi returned from suspension to face Belgium on Tuesday and was thrown straight back into the action and his pace presents a threat. He was booked twice before the Uruguay game, however, and appears to be a weak point on the disciplinary side for France, which Croatia may target.

Croatia fans believe Ivan Perisic has underachieved when playing for his country, until now. With two goals and an assist, the Inter Milan star scored a crucial winner against Iceland in the group stages, and had a hand in both of his side’s goals which dumped England out on Wednesday. He has finally found his form so must not be ignored by the French.

Olivier Giroud offers something that no other French forward does: height. His aerial presence has given France another route forward when flair has not quite cut it this summer and provides a good marker for Mbappe and Griezmann to operate around. He assisted Mbappe against Argentina and will no doubt be a target man when France need an outlet. Anything that goes Giroud’s way will cause havoc for Lovren and Vida.

Setting aside his efforts before the last four, the composure of Mario Mandzukic in front of goal against England is enough to show just how dangerous he can be. Like Giroud, he has a size advantage, but has shown he knows where the goal is too. Deschamps would have taken note of his brace on Tuesday and will be urging his players not to grant him the same amount of time in the box.