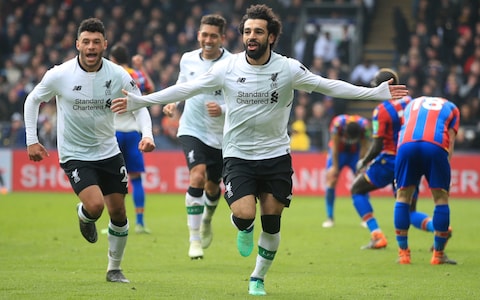 Mohamed Salah scored his 37th goal of the season in all competitions as Liverpool came from behind to secure a vital 2-1 victory at Crystal Palace.

Sadio Mane had scored the Reds’ equalising goal before being fortunate to avoid a red card, and the visitors capitalised by securing all three points with Salah’s 84th-minute effort to maintain their pursuit of a second-place finish.

Palace led at half-time following Luka Milivojevic’s penalty but after conceding another late goal at Selhurst Park they remain at risk of relegation from the Premier League.

In addition to Wilfried Zaha passing a late fitness test to start, Roy Hodgson’s team had been further strengthened by the return to their starting XI of the fit-again Yohan Cabaye for the first time since the defeat at Everton on February 10.

They are yet to secure a league point this season in Zaha’s absence and he again demonstrated his importance to their ambitions when he tested Loris Karius early on.

After being sent one-on-one with the goalkeeper following a fine ball from Cabaye and despite minimal time and space, he controlled with his left foot amid suspicions of handball before shooting with his right and watching Karius clear.

When he again went rushing through on goal, Karius needlessly rushed out and clumsily took him down, leaving referee Neil Swarbrick with little choice but to award the hosts a 13th-minute penalty.

For the seventh time this season, Milivojevic scored from the penalty spot, shooting powerfully into the bottom left corner while Karius dived right, to give Palace the lead.

Salah was below his best here, but like those most ruthless finishers with which he is now compared, he needs just one glimpse of goal. Only six minutes remained at Selhurst Park when the ball fell to Salah in the penalty box. The ‘Egyptian King’ took one touch to kill the ball, and then another to kill the game.

It was his 37th goal of the season, and his 29th in the Premier League. It was also the 21st league game in which he has scored, equalling the record for an entire season that was previously held by Cristiano Ronaldo and Robin van Persie.

Salah’s late intervention, added to Sadio Mane’s second-half equaliser, turned this encounter from frenetic to fruitful for Liverpool, and sent them 10 points clear of fifth-placed Chelsea in the hunt for Champions League qualification. 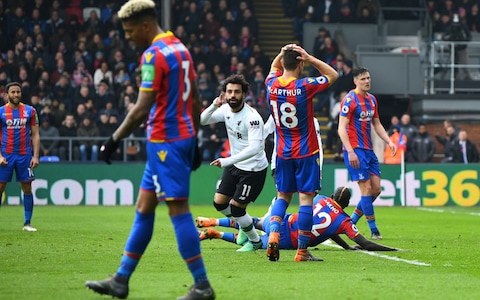