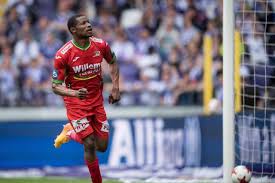 The Nigeria international Joseph Akpala was in action in KV Oostende 1-0 defeat to Royal Excel Mouscron in Belgium Pro League at Alberpark Ostend on Sunday.


The striker started for his club as they suffered home defeat in front of KV Oostende fans.

Akpala made several attempts but failed to score.

30-year-old signed for KV Oostende on July on a three-year deal.