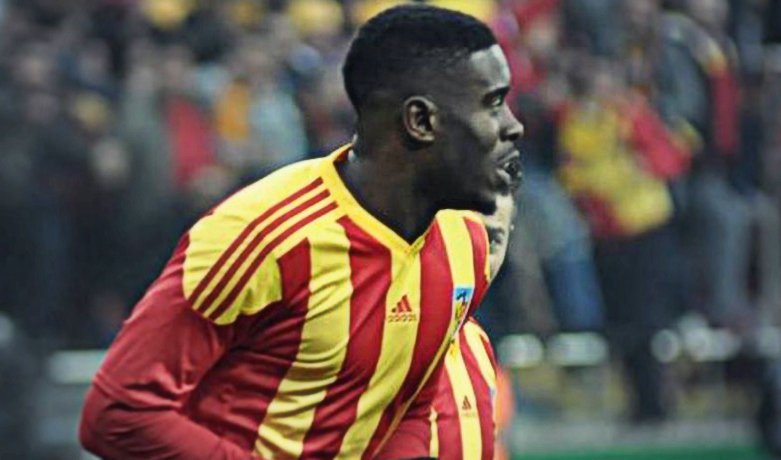 Portland Timbers new signing Larrys Mabiala will look to make his Major League Soccer debut.
Portland Timbers  confirmed the signing of the central defender Larrys Mabiala on Monday, stating that it was the culmination of a pursuit which began in February following the season-ending injury Gbenga Arokoyo suffered in preseason training.
“He’s a player we targeted all along,” Timbers coach Caleb Porter told assembled reporters following the announcement. Portland had been in contact with Mabiala since February, but could not get Kayserispor, Mabiala’s prior club, to agree to release the DR Congo international until the summer.
Kayserispor was in locked in a relegation battle in the Turkish Super Lig, Porter explained, with Mabiala being a key player. Team captain and regular starter, Mabiala was also able to chip in two game-winning goals to help Kayserispor go 3-0-2 over the final month of the season to survive in Turkey’s top flight.
“The good news is, he’s here now and we have the opportunity to transition him in over the next two-and-a-half weeks,” Porter remarked following Wednesday’s training, Mabiala’s first as a Timber.
“He should be available to play prior to the Real Salt Lake match, once the [summer transfer] window opens,” Porter said, although he also cautioned the newcomer would need to find his fitness after finishing a long season only a month ago.
Once acclimated, Porter believes that Mabiala will be an impact player.
“He’s a big boy,” Porter said, adding that he sees his new right central defender as an athletic, strong, physical type of player who can win balls both in the air and on the ground, but who also helps the attack in set pieces and has “good feet” that Porter hopes will allow the Timbers to build from the back.
Possibly the biggest expectation Porter has for Mabiala is to bring leadership and organization to a defense that has been ravaged by injuries this year.
Liam Ridgewell, Mabiala’s expected partner in central defense, continues to be hampered by a quad issue. Porter ruled him out for Saturday’s match against Sporting Kansas City. While Roy Miller will return from a one-game suspension for yellow card accumulation, Amobi Okugo – who started at center back back on Sunday in the 2-2 draw against Cascadia rival Seattle – suffered an MCL sprain during Clint Dempsey’s late equalizer.
There will be precious little protection from the midfield: Diego Chara (also injured in the Seattle match) out for four weeks with a hamstring strain and David Guzman called up to represent Costa Rica in the Gold Cup. Darlington Nagbe, who left with hamstring tightness on Sunday, hasn’t trained this week and Porter says is questionable against SKC. The result is that Zarek Valentin has been training at defensive midfielder, a position Porter doesn’t think the defender has ever played.
“That’s why you prepare for the worst always,” Porter says. “You just have to manage it, but having guys ready, by having good depth.”
While Mabiala cannot step on the field until after the window opens on July 10, Porter feels this stretch is an opportunity for him to demonstrate the mentality of a champion.
“This is another week we are going to be thin,” Porter said. “Yet we’re going into the game with a group of guys who I know will put their best foot forward. I believe that we’ll have a chance to win the game and get three points, even though we have some key guys out.”