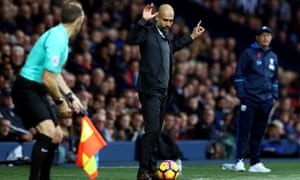 he Manchester City manager knows that only the best will do if another distres
As Pep Guardiola took his seat for another round of questions about what it was like to face Barcelona again, whether this time it might be any different and if it was true Lionel Messi was superhuman, an event of a very different nature was taking place a few miles away at the club Manchester City always measure themselves against first.
It was certainly unfortunate timing on the part of Manchester United to call a simultaneous press conference announcing, with some very important-looking capital letters, their first Official Mattress and Pillow Partner. A king-sized bed from the range of Mlily, the latest addition to United’s list of sponsors, was lugged on stage. A succession of first-team players obediently went through their lines about how delighted they were with the five-year arrangement – “It’s very important for us, as players, to maintain high-quality sleep,” Luke Shaw observed – and back at City they could probably be forgiven for thinking an awful lot had changed since the great European occasions always seemed to be at Old Trafford. 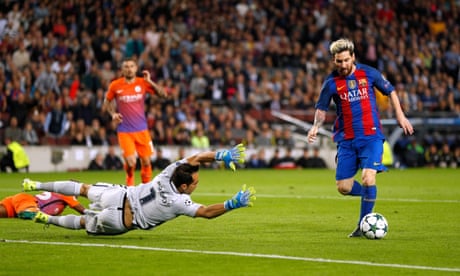 but even with 11 against 11 the truth is there have not been too many periods when City have given the impression they might bring Barça down a peg or two. One of the more one-sided encounters came on the solitary occasion, in March last year, when City managed to keep all their players on the pitch, losing 1-0 at the Camp Nou and lucky that Joe Hart put in one of his more distinguished performances.

The abiding memory from that night is of Guardiola being in the crowd, taking his own advice about watching Messi, and howling with laughter when the world’s greatest footballer slipped the ball through James Milner’s legs to put him on his backside. “The best player I have ever seen and probably ever will see,” is another quote from Guardiola’s time in Barcelona. His current club will have to hope the coach who brought through Messi may also know if there is any feasible way to stop him – though, sadly for City, it did not seem that way a couple of weeks ago.