FG FAILS TO PRODUCE DASUKI IN COURT FOR TRIAL 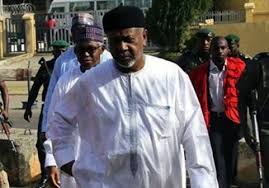 The Federal Government has again failed to produce the former National Security Adviser, Sambo Dasuki, before an Abuja High-Court for trial.
Mr. Dasuki is accused of money laundering and corruption.
He was charged along with five others before Justice Peter Affen, and was granted bail. He was re-arrested and kept in custody of the State Security since December 2015.
Others being prosecuted along with the former NSA include a former Director of Finance in the Office of the NSA, Shuaibu Salisu, a former finance minister of state, Bashir Yuguda; a former Sokoto governor, Attahiru Bafarawa, the ex-governor’s son, Sagir Attahiru, and a firm, Dalhatu Investment.
At the resumed trial Thursday, counsel to the Federal Government, Rotimi Jacob, told the judge that he was surprised that Mr. Dasuki was not brought to court by his client.
Mr. Jacob said on his part he notified the Economic and Financial Crimes Commission (EFCC) on the trial and the need to produce Mr. Dasuki in court, but said that communication gap between the EFCC and SSS was responsible for non-production of the former NSA in court.
Mr. Jacob applied to Justice Affen to stand down the case for him to enable his client to produce Mr. Dasuki in court.
He could not give a definite period within which the EFCC would bring the ex-NSA to court.
The action of the prosecution provoked reactions from Olajide Ayodele (SAN) counsel to former Minister of State for Finance, Mr. Yuguda, who opposed the request.
The senior counsel said the failure of the prosecution to give a definite time within which Mr. Dasuki would be brought to court by either EFCC or SSS was an indication that he haD no knowledge of what was transpiring between the EFCC and DSS on the matter.
Mr. Olajide therefore pleaded with the judge to adjourn the trial.
His position was adopted by Jacob Daudu, who stood for Mr. Dasuki and regretted that the government which put the ex-NSA on trial was the one scuttling the trial.
Mr. Daudu said since June when the matter was adjourned, the EFCC which initiated the trial on behalf of the Federal Government ought to have known that it its responsibility to produce Mr. Dasuki in Court as required by the law.
Former Attorney General of the Federation and Minister of Justice, Akin Olujimi, who stood for former Sokoto Governor, Attahiru Bafarawa, also opposed the request to stand down the case without a definite time.
He pleaded for an adjournment.
In his ruling, Justice Affen agreed that it would be unfair to stand down the case without a definite time within which Mr. Dasuki would be produced in court.
The judge advised the government to ensure Mr. Dasuki is in court, and adjourned the matter till October 21, 2016.